1864
Idaho City known as “Bannock City” grows to 7,000 population making it the largest city in the Pacific Northwest, larger than Portland, OR. 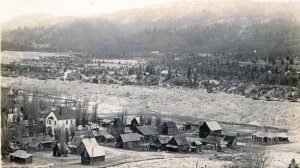 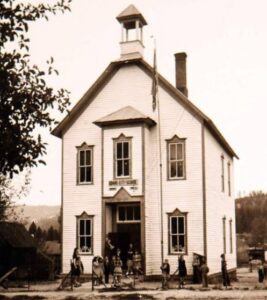 “A meeting was held last Wednesday evening to discuss the feasibility of building a new school house.  A committee of carpenters, consisting of Messrs, Taylor, Ferguson and Marshall, was appointed to examine the dilapidated building now used for a school house and report, at a meeting to be held next Sunday afternoon, at 3 o’clock, whether it can be made safe  and comfortable. If they report that it cannot, then the question , “shall a tax be levied for the purpose of raising a sufficient amount to put up a respectable building,” will be submitted to the citizens of the district. There is one thing certain, and that  is that the dilapidated structure- the Idaho City school house- can never be made comfortable nor substantial, no matter how much patch -work is done on it. The building was erected in 1864, and it is a relic of bye-gone days that is almost ready to tumble down. It may be possible to repair and prop it up so that it will stand a while longer, but it seems to us that, as a new building will have to be constructed sooner or later, it is the height of folly to keep on expending money on this old structure that can never be made either comfortable or convenient, nor substantial for any length of time.”